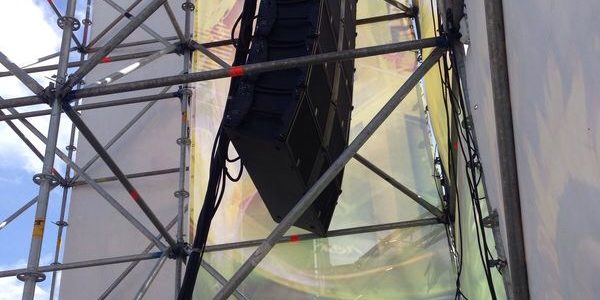 Founded in 1984 by Dr. Christian Heil, L-Acoustics has long been recognized as the inventor of modern line source arrays, with its V-DOSC technology accepted as a world standard of sorts for large-scale sound systems. Now L-Acoustics previews its next generation — the K2 medium-large line array, matching the V-DOSC in performance, but at about half the weight. The company’s director of application/touring Florent Bernard and director of marketing Stéphane Ecalle, offered these insights.

FOH: Tell us about the new K2 system.

Stéphane Ecalle: Three European companies are partnering with L-Acoustics in our K2 pilot phase: SSE in the U.K., Germany’s Black Box Music and Concept Even in France. They’ve been deploying K2 in the field, either as a main system or as a complement to K1. They’ve provided a significant amount of field experience, receiving outstanding comments from both engineers and owners. A production phase will ramp-up in December to address selected markets, with the worldwide K2 launch planned around Prolight+Sound 2014.

Florent Bernard: K2 is positioned in a similar application range as V-DOSC; typically productions with audiences up to 20,000. K2 actually delivers exactly the same max SPL and the same bandwidth as V-DOSC. Therefore it’s logical that K2 will replace V-DOSC in our product line, with V-DOSC taking a well-deserved retirement after 22 years of loyal service to the brand. We will continue providing after-sales service to our V-DOSC customers for the coming years. Now, from a genetic standpoint, K2 has more of a K1 DNA transplant into a 12-inch format enclosure, but with increased flexibility.

Where do you draw the line between K1
and K2?

Bernard: Since its introduction in the fall of 2008, the K1/K1-SB package has been optimized for very large-scale 20,000+ audiences. This narrow market corresponds to the world of very large green-field festivals, the largest arena tours, right up to stadium productions.

Ecalle: From a business standpoint, there’s a high financial commitment required for a sound company to service this particular market with one or multiple K1 systems. The standard K1 stadium kit comprises more than 100 K-enclosures, plus SB28 subwoofers, racks and accessories. Considering this seven-figure investment, the K1 market is a selective one. Nearly 50 Rental Network agents around the world have chosen K1 over the course of the last five years, and the system is recognized today as one of the top rider-friendly systems.

Bernard: Large-event clients seek the K1 benchmark sonic signature to deliver the best performance to their own clients. Moreover, the package needs to be adapted in size, rationalized for transport and with an extremely flexible deployment. This is where K2 comes into play.

How did the K2 design process evolve?

Bernard: First, K2’s acoustic performance had to be absolutely in line with K1 with a max SPL positioned 3 dB below its sibling and a bandwidth equivalent to K1. This determined the 12-inch format and the choice of drivers, which are of the same league as K1. Secondly, the vertical coverage had to be stretched to accommodate shorter throws and audiences with high tiers or balconies. The good news is that a 12-inch trapezoidal format authorizes twice the K1 maximum splay angle for a value of 10° versus 5°.

Ecalle: Next, we wanted to offer a lightweight system for medium-sized events or installations. The system needed to fit the rigging limitations in certain buildings. Also, for productions where temporary structures are deployed, the sound companies have to minimize their dimensioning, and therefore prefer aluminum and/or foldable systems against steel. This achieves a competitive edge in terms of transportation, logistics and associated labor costs.

Bernard: Another feature we wanted was adjustable horizontal directivity. With accurate control of the horizontal directivity, the sound designer can focus the acoustic energy onto the audience. In indoor situations, the sound is not projected onto reflective surfaces. This optimizes the direct field/reverberant field and improves the sensation of proximity. In outdoor situations, the noise exposure of sensitive neighborhoods is drastically reduced, as experienced during the pilot phase in the U.K. when SSE deployed their K1/K2 system in Hyde Park, a notoriously difficult site for sound control. Measurements taken on-site confirmed we were perfectly in-line with noise regulations.

This “acoustic steering” is perfectly accomplished in the vertical plane by L-Acoustics’ WST line sources. Horizontally, though, no manufacturer offers as efficient a system for steering acoustic energy in the horizontal plane on demand. The K2 offers four directivity settings in one box: 70° and 110° symmetrical; 90° asymmetrical left or right. Today, we have reached a new level of directivity control in the horizontal plane. With K2, this control is effective down to 300 Hz, with the very smooth coverage pattern that people have come to love on our most recent systems.

Finally, the K2 package had to offer full mechanical compatibility with the existing K1 and K1-SB elements. Control of directivity at low frequencies is the current challenge for manufacturers. The association of K1-SB and K1 in different configurations offers some solutions in LF control. These principles apply equally to K2 and K1-SB with the same benefits. The best illustration of this is the recent Hollywood Bowl K1/K1-SB installation (See FRONT of HOUSE, July, 2013, cover). The Bowl requires a system throw of 140 meters (459 feet), with a consistency in SPL and tonal balance, in an ultra-sensitive residential area where noise pollution is unacceptable. The system at the Hollywood Bowl delivers the same experience to any audience seat.

Of course, with any configuration, our universal SB28 subwoofer can extend the bandwidth down to the infrasonic domain. The SB28 can also be deployed solely with K2 in more conventional setups.

K2 owners can use this K1-SB compatibility feature to extend the K2 operating bandwidth or increase the LF throw with the combo K2/K1-SB. The rigging compatibility between the two systems also means that K1 owners can combine the two systems as they perfectly complement each other: K1 as a main system for long throw L/R applications, and K2 either as downfill to K1 or employed as side fills or delay. The combinations are limitless.

What were some of the challenges faced during the K2 development?

Bernard: The enclosure “weight loss” program was the most spectacular. We had to take a brand new R&D and industrial approach. When trimming the enclosure weight, the question of cabinet rigidity is central. Among the different varieties of Baltic birch plywood, the high-grade type used in all our products remains the number one choice for this size of enclosure. Its high fiber-density is both solid and — heavy! If you reduce thickness, the panels become lighter, and can vibrate and radiate omnidirectionally, like a vent — hardly acceptable for a premium system.

Using computer analysis, we “mapped” the panel areas where the birch plywood brings little stiffness contribution to the panel. Then we milled the K2 panels in an intricate pattern that yields the maximum stiffness/weight ratio. As for the side panels, the solution was to replace Baltic birch for a lighter and stiffer material: aluminum. The K2’s aluminum side panels play a triple role. They reinforce the mechanical rigidity of the box; act inside as a progressive vent for laminar airflow; and the outside supports the suspension hardware with the best mechanical accuracy. And all suspension hardware elements were optimized for the best resistance/weight ratio.

Ecalle: The results speak for themselves. The K2 weighs 56 kg/123 pounds — nearly 50% of V-DOSC’s 108 kg, for the same max SPL and bandwidth, with no compromise on structural and acoustic performance.

What is the planned K2 distribution strategy?

Ecalle: Aimed at both the fixed installation and rental markets, K2 addresses the needs of a wider customer base than K1, but K2 is definitely a premium system and our long-term strategy will not be altered. The K2 distribution strategy is simply based on two channels for our domestic markets where L-Acoustics is the distributor: Certified Providers/Integrators for the fixed installation market and Certified Providers/Rentals for the Rental Network. For the markets where we are not directly present, we will rely on our distributors.

K2 brings ROI in many aspects — brand reputation, rider-friendliness built on the K1 and V reputation and resale value. But if you want to acquire the system, you also enter into the logic of the Rental Network, which benefits the sound companies, clients and engineers. Advantages include: Being able to buy the right amount of boxes in terms of inventory thresholds, where buying a tiny fraction of a big system is useless, while buying too much would be dangerous. The bottom line? The logic of the Network will benefit the business of the K2 buyer in the long run.

The worldwide introduction of K2 is scheduled for Prolight+Sound 2014. However, the system will be seen and heard in the opening and closing ceremonies of a certain major winter sporting event in Russia in February.

Interested parties can contact their L-Acoustics rep and schedule a demonstration at our headquarters in France or the U.S. And let your eyes and ears be the judge.

At a Glance: Replacing V-DOSC